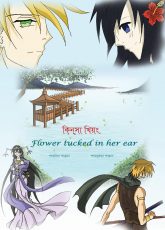 Flower Tucked in her Ear

A tragic romantic story between a Arakanese princess and a Marma prince. The story featured on their untainted love and the legend behind the name of the Bangladeshi river Karnaphuli. This manga competed in 11th International Manga Award in 2017 titled as ” Flower Tucked in Her Ear ” .

Short version of this manga is called “Kinsa Khyong” which was originally published on Monthly Kishor Alo in 5 October, 2016 and “Kinsa Khyong” is considered as the first original Bangladeshi manga.

Thank you so much!!

Made For Each Other

Made For Each Other

Flower Tucked in her Ear